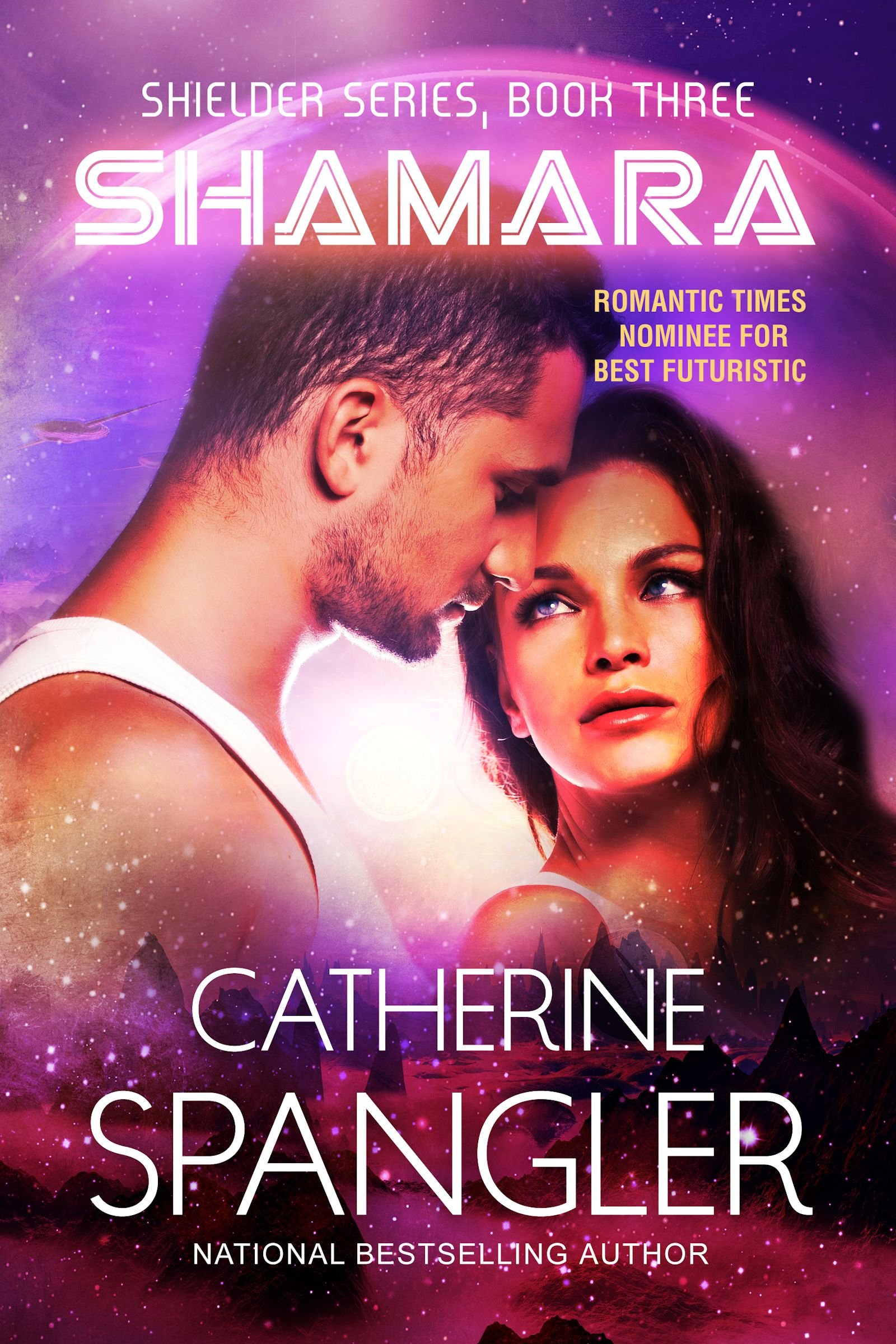 In a universe of darkness and depravity, the Shielders battle to stay one step ahead of the powerful, vengeful Controllers, who are determined to destroy the entire Shielder race. The race’s survival depends on the quest of one man—Jarek san Ranul. He has found evidence of a wormhole he believes might offer the Shielders an escape to another galaxy. But he faces daunting challenges to make such a mission possible. When he meets Eirene Kane at a Pleasure Dome and she saves his life, he realizes she might be the key to facilitating his daring plan.

On the run from her cruel uncle and a Leor warlord who wants her as his bride, Eirene must hide her true identity. She’s an Enhancer, with rare powers that could get her sold to the highest bidder if she’s caught. Her flight puts her on a collision course with Jarek, who suspects her secret, and knows he needs her powers to make his plan work. Although Eirene refuses to admit she’s an Enhancer, Jarek believes otherwise and is desperate enough to kidnap her. During their enforced time together, a special bond forms between them, leaving Eirene torn between her attraction to this charismatic Shielder commander and the need to ensure her survival. Despite the danger should her true identity ever be exposed, she finds herself falling in love with Jarek, and wanting the one thing he claims will free them forever—Shamara.

She was terrified of channeling energy but more frightened of the mating act. Hopefully, if she could use just enough energy to inflame the client’s libido without hurting him, he wouldn’t notice her lack of experience—or her virginity.

A tone sounded and the panel by the entry lit up. “Oh, you’ve got a client already!” Lani sashayed over to the panel and indicated the display. “This will give you all the information you need to know about him. His name—first name only, of course—his race, his—ahem … personal preferences.”

Oh, Spirit. Her heart pounding, Eirene walked over and read the information. A humanoid male, Jarek, had purchased the whole evening. He didn’t state any unusual preferences.

“Oh, lucky you!” Lani squealed. “You got an easy one your first night here. He’s human. That’s better than having an alien.”

“An alien?” Eirene pressed her hand against the display to steady herself. She hadn’t even considered that possibility. “You mate with aliens?”

Lani shrugged, her feathers fluttering. “It’s really not so bad. I refuse to take the slimy ones, though. And some are quite … nice.”

“And your client is staying all night. That’s good,” Lani continued, seemingly oblivious to Eirene’s revulsion. “Of course, Madam Zandra always limits it to three in one shift. She wants us fresh and perky for the next night.”

Three in one night? Even more appalled, Eirene vaguely remembered Madam telling her that. Panic began to build in her tense body. Spirit, what was she doing here?

A chime sounded—her entry panel. “He’s already here. He’s an eager one!” Lani patted Eirene’s arm. “I’ll clear out. Have fun.” Balancing on her high spike heels, she strutted toward the panel adjoining Eirene’s chamber with hers.

Eirene battled the urge to drag Lani back and beg her to take this client.

Lani turned at the panel. “Oh, yes. There are alarm buttons by the bed, the couch, and the vibra-chair. If your client gets out of hand in any way, use one to call security. Madam doesn’t like for us to be roughed up or hurt. Ta-ta!” She was gone in a flash of blue feathers.

Alarm buttons? Roughed up? Hurt? The building knot of panic exploded and raced through Eirene’s body. She couldn’t do this. She couldn’t. She didn’t know anything about mating. Well, actually, she knew how it was done, but—

The chime sounded again, a death knell from Eirene’s terrified perspective. No, she told herself firmly, willing herself to calm. This was a necessary step toward the freedom she sought. She was merely divesting herself of her most valuable known commodity, reducing her bartering value, and keeping herself out of the hands of the Leors. It would be far more dangerous should the fact she was an Enhancer be discovered.

Forcing air into her lungs, she opened the panel. She wasn’t wearing heels, and she wasn’t tall to begin with, which put her eye level with a masculine chest. Adrenaline resurged, and she froze, her gaze locked straight ahead. The black flightsuit her client wore fit snugly, emphasizing nice muscle delineation. He was solid, but not barrel-chested or overly developed like many Travan males.

“Hey. I’m up here.” His voice was pleasant, deep and quiet, but she thought she detected a hint of nervousness.

Reluctantly, she raised her gaze. He was relatively young, she realized, perhaps thirty-five seasons of age. He was clean-shaven, with dark eyes and wavy hair the color of rich brown yarton wood. He studied her in return, his gaze sliding over her face and down her body. She steeled herself, expecting the rush of lust she was accustomed to picking up from men . . . and felt nothing.

At least, no emotions. He radiated energy, as did all living things. She felt the warmth of his body, and sensed a calm well of strength within him. But no emotion—no lust, no anger, or joy, or even the nervousness she had heard in his voice. She drew another breath, trying to compose and center herself. Her fear was interfering with her powers. She couldn’t control this situation if she couldn’t lock on to his thoughts and feelings. And she had to be very careful, so she wouldn’t hurt him

. “I’m Jarek sa—” he began, then stopped, as if suddenly remembering no last names were given at the Dome. Madam Zandra had that information, of course, along with the client’s ID disk, which was held until the transaction was completed to the satisfaction of both parties. “I’m Jarek,” he finished lamely.

Eirene didn’t respond, trying again to link with his mind. Why wasn’t it working?

He turned his head sharply as if he heard something, his body tensing. He stared down the corridor one direction, then the other. Startled, she halted her linking attempt. He looked both directions again then shook his head as if to clear it.

She nodded and moved back, not used to a male asking permission for anything. He stepped into the chamber, and she backed up farther. He was at least six feet tall, his build sleek and lean. Again, she became acutely aware of his vibrant life force, strong and focused. She’d only ever felt such strength from Rayna, her mentor.

The automatic panel slid shut behind him with an alarming, final thud. He glanced around the room briefly before his dark gaze settled on her. Eirene couldn’t breathe, couldn’t move, like a terrified kerani caught in a snare.

He didn’t move, either. Uncertainty flickered in his brown eyes, and she realized he was unsure how to proceed. Perhaps he didn’t purchase pleasure at a Dome often. An experienced courtesan, like Lani, would have known exactly what to do to put a client at ease, to get on with it.

As a matter of fact, Eirene felt certain Lani would never be at a loss for words—or feathers. But Eirene had no idea what to do next, except to try to spur Jarek into lust and a mating frenzy. Once again, she attempted to tap into his psyche. Nothing. It felt as if she had slammed against a wall.

Immediately, his gaze shifted from her. He strode around her and checked the chamber thoroughly—beneath the furniture, in the lav. One hand rested lightly on one of the weapons strapped to the black utility belt encircling his trim waist. He stopped by the panel adjoining Lani’s chamber. “What’s in there?” he demanded, indicating the panel.

“That’s another courtesan’s chamber,” Eirene replied, giving up her attempt to link.

Jarek scanned the room again, although he visibly relaxed. “Strange,” he muttered.

“Ah . . . it’s nothing.” That dark gaze returned to her. He moved closer, halting by the vibra-chair. “Sorry if I alarmed you.”

She couldn’t think of anything to say so she simply stood there, trying to collect her wits.

She liked his voice, the way it resonated. She nodded, still unable to speak.”

Adrenaline snaked through her, sending her heart pounding in a terrifying rhythm. She wet her parched lips with her tongue. “Th-thank you.”

This was it. She was going to lose her virginity to this man, but her plan had failed. She would not be able to cut this short by overloading his senses. She shouldn’t be surprised; she’d long ago proven her ineptness at controlling her powers. Her attempts to use them had no affect on Jarek. Oddly enough, they’d seemed to agitate him, almost as if he could sense them—which would be very dangerous, indeed. She clenched her hands and waited.

“Well, then.” Blowing out his breath, he unbuckled his utility belt and tossed it onto the console. Immediately, lusty Elysian music blared through the speakers. He hastily swept up the belt and punched buttons until the racket stopped. “Sorry about that.”

He grinned boyishly, and Eirene’s heart skipped a beat.

There was something appealing about his clean-cut features. He didn’t have the spoiled, dissipated look that accompanied excesses of food and drink and mating— the look most of the Travan men had.

He sank into the double-wide vibra-chair and pulled off his boots. Muscles rippled beneath his flightsuit, indicating that he kept himself in prime physical condition. He straightened, then leaned back, his unnerving gaze fixing on Eirene.

“I guess we’d better get to it,” he said, his voice low and rough. He reached for the seam of his flightsuit, began opening it. “Why don’t you undress for me?”

“Ms. Spangler masterfully takes readers into an enchanting world. Bringing back favorite characters from past books in this series and placing them in this magical tale able to stand completely on its own, she delivers sheer delight.” ~ Debbie Richardson

“Anyone who says, ‘You can’t please everyone,’ has yet to read SHAMARA, by award winning author Catherine Spangler. Fantastic! A futuristic romance that will make the reader, laugh, cry, and sigh, SHAMARA has all the ear markings of a keeper . . . Catherine Spangler’s star is definitely on the rise! I highly recommend SHAMARA.” ~ Leslie Tramposch, PNR Reviews

“SHAMARA by Catherine Spangler is an outstanding read. With the perfect blend of psychic gifts, space travel and old fashioned romance, Spangler creates a novel readers will find impossible to put down . . . This fast paced plot with its wonderful secondary plot line will please previous fans in addition to earning many new ones. The carefully balanced characterizations and action make SHAMARA a Winner of the WordWeaving Award of Excellence.” ~ Cindy Penn, WordWeaving