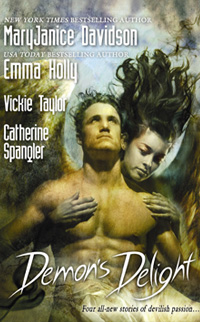 Rachel Stryker has given up hope of ever finding redemption for being a monster—a vampire, a transformation forced upon her by Nazi soldiers in a concentration camp when she was 19. She survives in current-day Dallas as a prostitute, taking the blood and money she needs while providing fantasy mind sex to her clients. Then she meets Gabriel Anthony, a sexy angel in human form sent to show her she isn’t a soulless monster, but a woman who is worthy of happiness. Rachel is resistant to Gabe and doesn’t believe him, although he exacts her promise to give him one week to convince her otherwise.

Gabe has helped many people over the centuries, but none have pulled at his heart as Rachel does. Nor has he ever experienced the no-so-angelic attraction he feels toward her. He takes her somewhere new every night, trying to show her a world in which she can be a part, if only she’ll accept the gift he’s offering—that of life. And ultimately, to the surprise of both of them—love.

Gabriel was lit up like a freaking solar explosion, with bursts of light shooting out from all around him. And his hair was blowing around his face, even though there wasn’t a hint of a breeze. All the while, that horrifying light kept streaming out of his palm. Oh, my— No. She was not saying His name. Add one more thing to her list of dislikes about this man: He scared the crap out of her. She was out of here.

Rachel whirled and ran. He called after her, but she only ran faster. Terror shot adrenaline through her body, making it hard to breathe, to think, to function. But the primal need to survive was strong and clear. It was no longer a question of who this man was, but what he was. She didn’t want to know. In a world were vampires were a certainty, the possibility of numerous other monsters was too real. Not to mention the human monsters plaguing the world throughout history.

With her superhuman speed and the adrenaline jolt, she ran the miles to the hospital parking garage in record time. Heaving a sigh of relief, she dug her keys from her fanny pack as she jogged up the ramp to the third level. She looked towards her car and utter shock jolted through her. The keys slipped from her fingers, clattered on the concrete.

“I didn’t mean to frighten you.” Gabriel pushed away from where he’d been leaning against her car and came towards her.

She backed away. “Don’t come near me.”

He stopped. “I won’t hurt you, Rachel. If I had evil intentions, I could have fulfilled them at any time. Right?”

That made sense, except she was so freaked, her mind wasn’t functioning very well at the moment. She took another step back.

Holy didn’t have a place in her life any more. “I keep telling you I don’t want any help. Go away.”

He sighed. “I can’t do that. Look, maybe I shouldn’t have shown you that power flash, but I wanted to assure you that I can take of myself. And to give you a glimpse of who I am.”

“I don’t care who you are. I just want you to leave me the hell alone.”

“I already told you I can’t do that.” He took a step closer, held out his hand as she turned to bolt. “Running is futile. I can track you wherever you go. Why don’t you hear me out before you do anything rash? You know you want to.”

There it was again—that hint of compulsion. She resisted it, as she debated what to do. She sensed sincerity behind his words. The fact he’d beaten her to her car—hell, that he even knew what she drove and where it was parked—showed he was very powerful. She probably couldn’t defeat him. She hated feeling powerless. When she left Germany, she had sworn she’d never be helpless, or at anyone’s mercy again.

“This isn’t about control or domination,” Gabriel said quietly.

Startled, she stared at him. Was he a mind reader as well? Here in the semi-lighted garage, he didn’t look very threatening. He appeared to be just an attractive man with thick, dark-blond hair and unusual blue eyes. Even the brightness he emanated was less obvious here, probably because of the lighting.

She stiffened, realizing he was suddenly in front of her. How had he moved so quickly, without her seeing his movement?

He touched her, clasping her shoulders. Warmth tingled from his hands into her chilled body. She gasped, tried to step back, but he tightened his grip. “I’m here to show you how to move from a minimal existence to a full, meaningful life. The life you were denied in Germany. The life God wants you to have.”

He ran his hands lightly down her arms. The electricity followed. “That doesn’t matter. She believes in you.”

“She?” Rachel realized she was getting distracted, brought her attention back to the matter at hand. “Never mind. I don’t want to know.”

He grinned, and the light around him surged. Damn. She needed sunglasses. “We can accomplish a lot without talking about She whose name you will not say,” he said.

How did he know about her aversion to God? And . . . She? “I still don’t understand.” Rachel tried to tug free of his grasp, failed. Tried again, using superhuman force this time. Failed again. “Damn it! Let me go.” When he just looked at her, she considered, added, “Please.”

He released her, and the chill returned. She rubbed her now-cold arms, her mind running through options. She was smart, had been very bright when she was human, the top of her class in school. But it really didn’t take much intelligence to conclude she might as well listen to what he had to say. She couldn’t glamour him, couldn’t outrun him, and couldn’t overpower him. He had the upper hand—for now.

He stepped back, shoved his hands into his pockets. “You already know I’m here to help you. You suspect I’m some sort of monster. That’s not exactly right. I am, however, a supernatural being. But I’m on the good side.”

She couldn’t stop the question that tumbled out. “What are you?”

His gaze locked with hers, and his eyes grew even more luminous, taking on an otherworldly glow. “I’m an angel.”

“Street Corners and Halos was wonderful and it’s one of the best short stories I’ve read in some time. . . . I teared up at this story. I’ve seldom read one that brought home the redeeming power of love so strongly.” ~ All About Romance

“Catherine Spangler’s novella was innovative, haunting and beautiful. Worth the whole book. It alone would get four and a half stars.” ~ GoodReads